Fordham Road is not your average rock band. The band seamlessly blends genres, from inde to reggae while still being rooted in progressive rock. Influenced by bands such as Rush, Yes, and Kansas, they absorb inspiration from many different genres to create their own unique sound.

The band was formed by Tom Shubsda and Kristian Veech on January 20th, 2016. The original lineup of the band was a revolving door; almost every single show featured different musicians, the only constant being Tom and Kristian. Later that year they started to solidify the band, officially bringing on Mark McCarthy to play guitar and trombone as well as Joe Everret on Bass. 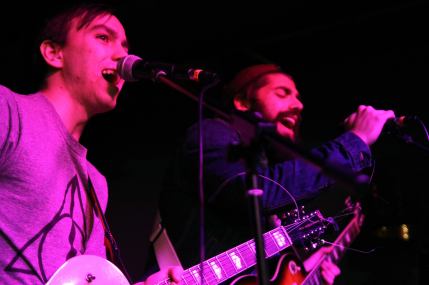 Fordham Road made their debut with their EP “The Gates of Heaven” in February 2017, following it up later that year with “Fordham Road,” their first full length album. The band frequently tours and performs around the New England and the Northeast.

“We aim to continue to break down genre barriers and bring new sounds to Progressive Rock. We also strive to create a hopeful and loving community at our live shows. We believe that music should be used to heal and hope that our message resonates with our audience and beyond.”

Tonight at @obrienspubboston with @slacktideofficial and @fatherblueberries !!
Brightside is now officially out on all streaming and download platforms! Shout out to @owenkorzec for helping out with the mixing and @ericsmithnh for laying down some trumpet tracks. Give it a listen and we hope to see you at the release show at @themidwaycafejp tonight!
Brightside comes out at midnight tonight everywhere! We’ll be playing the album top to bottom tomorrow night at @themidwaycafejp at 8:30. 21+ $8 cover 🌕🌖🌗🌘🌑🌒🌓🌔🌕
@mark_mccarthy_music laying down some spice that you can on ‘Brightside’ . June 14th, be on the 👀
%d bloggers like this: